Get Your Tickets Now For Art From Scrap Fundraiser

On the evening of Saturday, April 5th, the Art From Scrap Gallery will be transformed into a celebration of all things assemblage. That night from 5:30 pm – 9:00 pm, over 70 mischief-making artists will show their work in the Art From Scrap Assemblage Art Show and Fundraiser. The theme of this year’s event is Mischief! The challenge was to create a new artwork that incorporates a piece of previously created art. 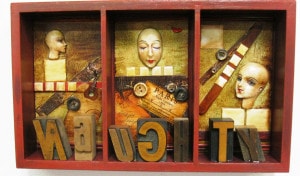 The public is invited to come to the Art From Scrap Gallery from March 8th until April 5th to bid on their favorite art. This year’s artists include local greats Ron Robertson, Dan Levin, Joan Rosenberg Dent, Neal Crosbie, Colleen Kelly, Bari Ramoy, Brad Nack, Mike Brady and many others. Assemblage master Michael deMeng, who taught a workshop at Art From Scrap in February, also contributed a piece to the show. 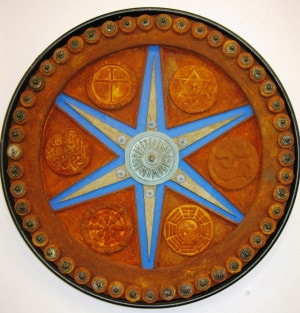 A Shrine For All Occasions- Ron Robertson

The cost to attend the evening event is $15.00. Tickets are available online at EventBrite or at the door. All of the proceeds benefit art programing at Art From Scrap. Artwork will be sold during the closing night party where you can enjoy a mischievous photo op with Bob Debris, music with DJ Darla Bea of KCSB FM, food, beer from Telegraph Brewery and wine from local winemakers. Bid on silent auction items including a four night stay in Sayulita, Mexico, dinner at local restaurants and other exciting items. 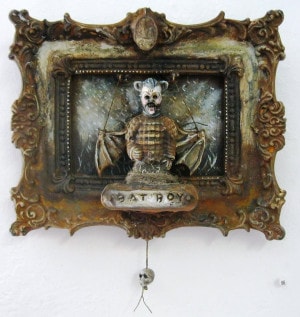 The Assemblage Muse for 2014 is Dan Levin, whose art will be the centerpiece for the exhibition. 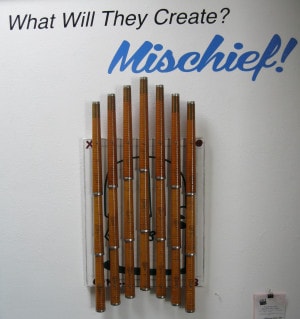